The confluence of the Peace and Athabasca Rivers forms one of the most verdant, biodiverse ecosystems in the world. Toxins from tar sands operations up the Athabasca have turned one of the most pristine wetland systems into a danger for those that depend on it.


The Alberta Tar Sands defy comprehension on many levels, starting with the fact that most people don’t even know of their existence. Located north of Edmonton, Canada, it is the second largest oil reserve in the world, and the largest environmental disaster. The impact is systemic, affecting every facet of the environment: air, earth, and water, and causing everything from global warming to cancer in the people that live in the vicinity. The issue is all the more egregious because the authorities are ignoring the law and allowing this travesty to continue operation. As is so often the case, the public is unaware of the colossal damage done to provide the calories we crave.

The tar, or oil sands, are in one of the largest estuarial systems in the world where there is a large volume of bitumen, a tarry hydrocarbon, trapped in the earth. Extraction involves the strip-mining of vast regions that are both valuable Boreal Forest habitat and precious water resources, rendering them desolate lifeless moonscapes for eternity.

The material extracted must then be reduced to usable hydrocarbons, a process that uses tremendous amounts of water, energy, and oceans of toxic chemicals. The “upgrading” is one of the dirtiest refining processes and is, in itself, the cause of Canada’s rapid escalation as a greenhouse gas emitter. Info source 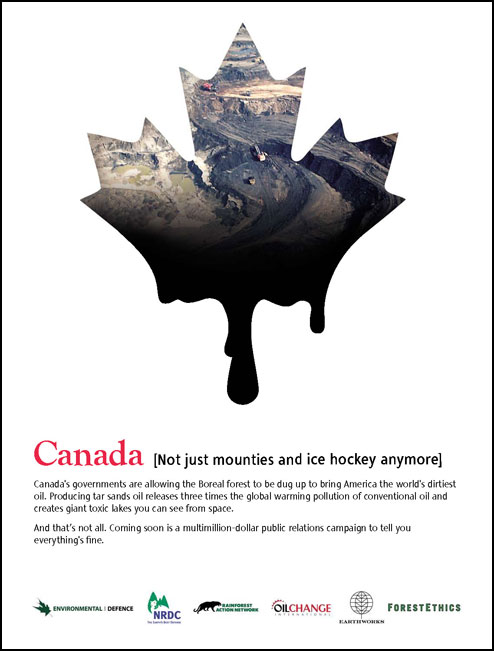 2 Responses to Giant Toxic Lakes Visible From Space in Canada